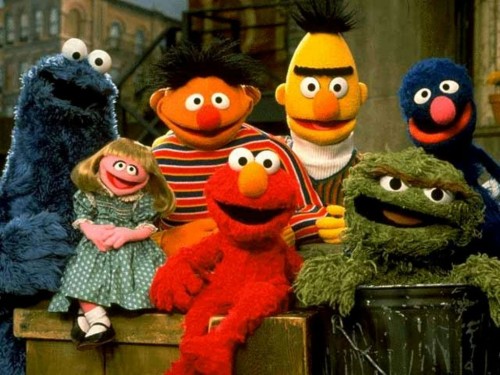 Some of the familiar Sesame Street gang. Uploaded by myfreewallpapers.net.

Educational! Enlightening! Entertaining! Today’s Great American Things post is brought to you by the letter E.

You probably didn’t know that Sesame Street has won more Emmy Awards than any other series in the history of television (118). It’s been on the air since November, 1969, has been shown in more than 120 countries, and is the most-watched children’s program in the world.

You can’t think of Sesame Street without thinking of the Muppets, created, of course, by the late Jim Henson. What would the show have been without them? Without Bert and Ernie (who the show’s creators swear weren’t named after the characters in It’s a Wonderful Life)… Oscar the Grouch… Elmo… Big Bird (8′ 2″ tall)… Snuffleupagus (size 65 GGG shoes)… and The Count (born Oct. 9, 1,830,653 B.C.).

Obviously, the producers don’t have any problems with capitalizing on the popularity of their show. Licensing has taken Sesame Street into movies, books, and games. Toys (Tickle Me Elmo was an all-time smash). Live performances (48 million people have seen productions of Sesame Street Live). Even a Sesame Place theme park in Pennsylvania.

People who watched that original season of the show now have grandkids who love Elmo and Big Bird just as much as they did. And the show doesn’t seem to be slowing down. Maybe this generation’s grandkids will be watching Sesame Street in 2050. Don’t bet against it.

Just a couple of days ago, the Daytime Emmy show paid tribute to Sesame Street, and it’s sooo nostalgic. Take a look:

This entry was posted in KID STUFF, TV SHOW. Bookmark the permalink.