Virtually every African-American performer of consequence has played the Apollo in the last 75 years. Uploaded by emiliogrosso.com.

In 1914, a new building was constructed on 125th Street in the Harlem section of New York City. Named “Hurtig and Seaman’s New Burlesque Theater,” the establishment opened with one now quite ironic rule — no African-Americans were allowed in the audience.

A couple of decades later, things had changed. Ralph Cooper, Sr. decided to do a live version of his popular radio program “Amateur Night Hour” at what was now known as 125 Street Apollo. The program was a hit, and one of its earliest winners was a special 17-year-old girl named Ella Fitzgerald. (She won $25.) The next year, the theater’s headliners would become musical legends: Bessie Smith and Billie Holiday. 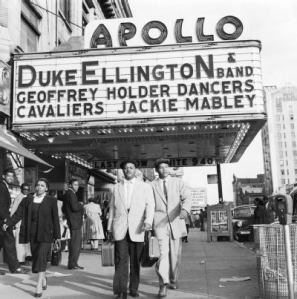 By the mid-1970s, the Apollo fell on hard times, and in 1975 was converted into a movie theater. Fortunately, its place in the history of African-American culture wasn’t forgotten, and Inner City Broadcasting purchased and refurbished the building. It reopened in 1985 with a well-deserved place on the National Register of Historic Places.

Amateur night at the Apollo continues, a competition that for years could be seen in syndication on the program Showtime at the Apollo…

This entry was posted in Americana and tagged Harlem, James Brown, Jimi Hendrix, Michael Jackson, Showtime at the Apollo. Bookmark the permalink.