They had to invent a term to accommodate Porter’s contributions to the popular music canon: The Great American Songbook. Of course, there are other composers and songwriters represented, but when you look at all the great songs Porter penned, his impact on our shared culture is staggering. 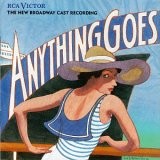 Many of Porter’s hits were written for his Broadway productions. Among the shows he provided music for are The Gay Divorce (Fred Astaire’s last stage show, made as The Gay Divorcee on film), Anything Goes (which might be subtitled “Porter’s Greatest Hits”), and Kiss Me Kate.

While Porter loved the wild Hollywood life of the 30s, he had a riding accident in 1937 that crushed his legs and eventually led to both being amputated. He had more than 30 surgeries on his legs, and endured constant pain the rest of his life. He experienced chronic depression, and his work suffered.

Even so, who in American music has ever written a lyric that matches this:

This entry was posted in Music and tagged Composers, Popular Music, Songs. Bookmark the permalink.