History: Tomb of the Unknown Soldier 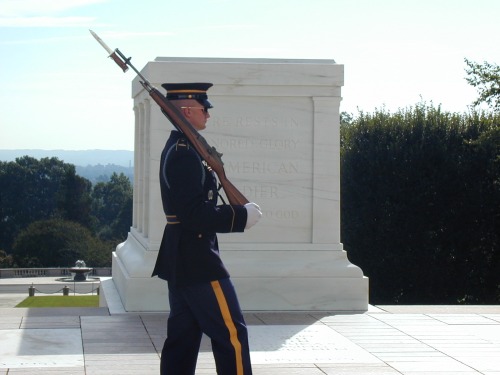 Several years following World War I, Congress approved the burial of an unknown soldier at Arlington Cemetery. The process for selecting the soldier to be honored has remained essentially the same since that time. Several identical caskets containing the remains of an unidentified soldier are prepared, and a highly decorated veteran of that war makes the selection at random. That coffin comes to Arlington; the others are buried with honors at foreign battlefield cemeteries.

The procedure has been followed for the World War II, the Korean War, and Vietnam. Surprisingly, considering the all-consuming nationwide effort that led to victory in the second world war, the unknown soldier for that war and for Korea weren’t interred at Arlington until 1958. 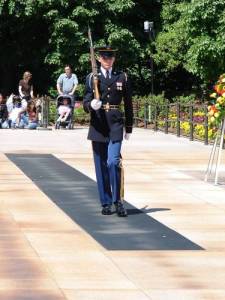 The tomb itself is guarded 24 hours a day, and the guard is changed each half hour in summer, each hour the rest of the year. Those soldiers performing this prestigious guard duty don’t wear rank insignia on their uniforms, so they don’t outrank the Unknowns.

One factor unknown to the world when the monument was revealed in 1921 is DNA. According to the Arlington National Cemetery website: 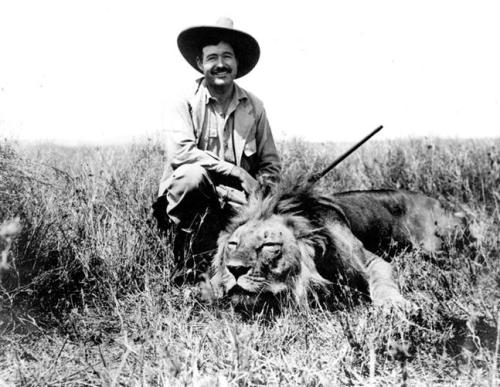 Hemingway was a big game hunter, a world-class fisherman - oh, and he could write a pretty good novel, too. Uploaded by jfklibrary.org.

He was a great writer, called the greatest writer since Shakespeare by John O’Hara. And he had a larger-than-life personality. You can call him a lot of things, but I don’t think you can call a man who drank too much, married four times, and eventually committed suicide, “Papa.”

What do you say about a man who wrote some of the greatest novels and short stories in the history of American literature, but who never actually realized his true potential? He drove an ambulance in Italy during World War I…lived in the amazing Paris arts community along with Gertrude Stein, James Joyce, Pablo Picasso, and Ezra Pound…covered the Spanish Civil War for the North American Newspaper Alliance, landed with the Allies at D-Day and was present at the liberation of Paris…all while writing the occasional novel or short story. What could he have accomplished if he’d given himself completely to novels? 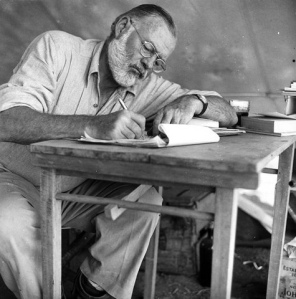 Just look at what he accomplished when he did focus. In order of publication, his novels include “The Sun Also Rises,” “A Farewell to Arms,” “To Have and Have Not,” “For Whom the Bell Tolls,” and “The Old Man and the Sea.” This last book won the Pulitzer Prize (Great American Things, February 19, 2010) for fiction, and also influenced his selection for the Nobel Prize in Literature.

Hemingway had four rules for writing: 1. Use short sentences. 2. Use short first paragraphs. 3. Use vigorous English. 4. Be positive, not negative. Hemingway elaborated on his method to F. Scott Fitzgerald: “I write one page of masterpiece to 91 pages of shit. I try to put the shit in the wastebasket.”