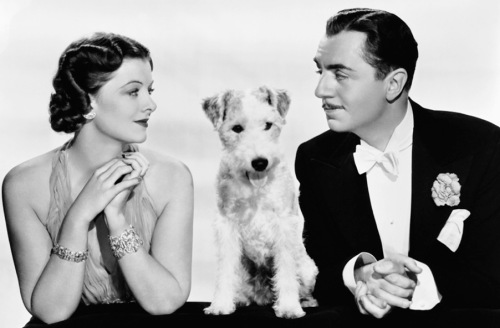 Audiences during the Depression lived vicariously through the lives of the wealthy and charming Nick and Nora Charles. Uploaded by tvworthwatching.com.

I owe a lot of my love for classic films to my wife, and one of the treasures that she helped me to discover was The Thin Man. Based on a novel by Dashiell Hammett, it’s either a mysterious comedy or a lighthearted mystery. Whatever it is, you can’t help enjoying the company of Nick and Nora Charles. And their wire-haired fox terrier, Asta.

Nick and Nora were brought to life by outstanding actors William Powell and Myrna Loy. They were socialites who seemed to solve crimes just for the fun of it. Hollywood hasn’t given us another couple quite like this, and never will again, since their charm seems very much rooted in the 1930s. Audiences vicariously enjoyed escaping the rigors of the Depression by spending time with the well-to-do and engaging Charles family.

By the way, the name “The Thin Man” applied to the murder victim, not to Nick Charles. But everyone associated it with the character, so that’s why it stuck for the sequels…