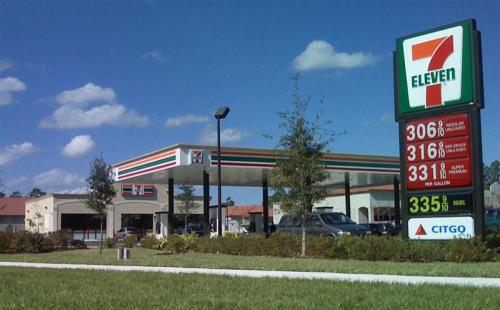 7-Elevens used to be EVERYWHERE. Then financial hard times hit, and many locations closed. Now you may have to keep your eyes open when visiting away from home, for that special Slurpee treat. Uploaded by gasstationsusa.com.

As with other Great American Things posted here, this post honors the convenience store 7-Eleven in its past, when it was ubiquitous in every city – and still American.

In the late 1920s, the Southland Ice Corporation in Dallas started selling a few food products from the ice dock. People liked that their milk and dairy products stayed fresh because of the ice. And they liked not having to go all the way to the grocery store for just a few items. It was…convenient.

Southland and successors owned the company until financial hard times hit, and the company is now operated out of Japan. But 7-Eleven has had a huge impact on American life. 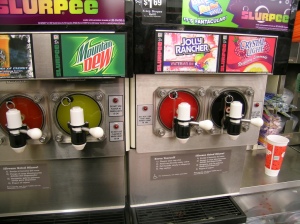 What would America be without the Slurpee? Well, it would be pretty much like it is now in most places where 7-Elevens are no more. But we have the Icee, Slushie, Mr. Misty, and other frozen offspring. Well, that sounds vaguely creepy, but the point is, we need our frozen slushy syrup.

7-Eleven also gave us the Big Gulp, and then the Super Big Gulp. It made it socially acceptable to drink more ounces of soda at one time than most people need for a month.

Financial problems have caused 7-Eleven to close many of its stores across the country. The company says 6,000 remain. But we have Sheetz, Wawa, Circle K, and the Apu’s Quik-E-Mart. Okay, that’s just on television, but you know it’s actually the 7-Eleven in Springfield…