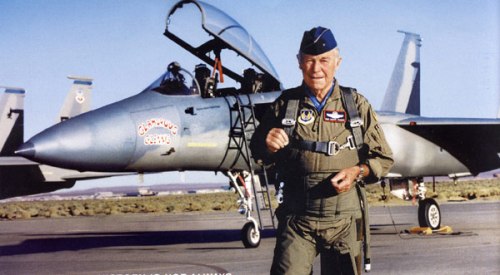 My father ran the control board for the wind tunnels at Langley Field in Hampton, Virginia. As new airplane models were tested, he watched prototypes came to pieces under the stress of flight. As a result of his observations, he never flew in a commercial airplane. But he had great respect for test pilots – and Chuck Yeager was the very best.

At age 24, Yeager was the first man to travel faster than the speed of sound, flying the Bell X-1 at 45,000 feet. While that was his signal achievement, Yeager had a distinguished career as a fighter pilot during World War II and wing commander during Vietnam. He retired from the Air Force with the rank of brigadier general. 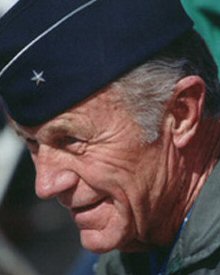 Yeager grew up in the back hills of West Virginia, in a town called Myra. Well, “town” might be stretching it. Myra is a suburb of Hamlin. That accounts for his accent, but also for his no-nonsense, well-grounded personality. Let’s conclude this post with a couple of quotes from the general:

“I get a lot of letters from kids. ‘What do you recommend that I do?’ And my simple answer is that nobody ever gave me any advice. I have found that those who do it on their own do it best.”

“I still have my grandmother’s recipe for butterscotch pie. A couple of years ago I entered that pie in the county fair where I live now in California and it won a blue ribbon.”