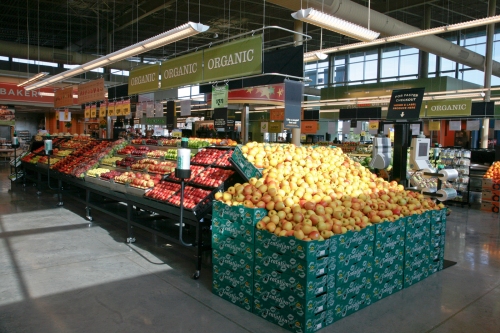 Supermarkets know we love choices. So we don't have to buy just any old apple, we can buy the specific variety of apple we like best. Uploaded by i.bnet.com.

At first glance, a strange choice, I concede. We take our supermarkets so much for granted. But go to virtually any other country in the world, and outside of maybe the largest cities, good luck finding one. America developed the idea, and offers more of – well, everything – than you’ll find anywhere else in the world. 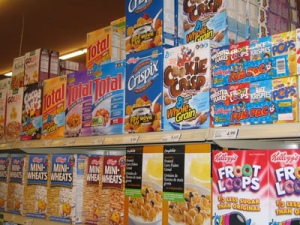 The first thing that our supermarkets provide us is an amazing choice. Let’s just take a walk down the cereal aisle. There are sweetened and plain varieties. Rice, wheat, corn, oats. Cartoon characters. Cookies. Movie tie-ins. Flakes, puffs, pops, and o’s. Strawberry, blueberry, apple, raisin, and banana. Chocolate, peanut butter, honey, yogurt. Pecan, walnut, and almonds. And when you go back next week, there’ll be something you haven’t seen before.

Beyond choice, supermarkets have continued to expand their culinary horizons. It used to be if you wanted an apple, you might have red or golden delicious. Now you’ll see Gala, Fuji, probably several others. If you have a recipe that calls for shiitake mushrooms, chances are your store will have them. Need some filé powder for a Cajun recipe? Look in the ethnic foods aisle that most store now provide.

Of course, today’s grocery stores sell much more than food. You can purchase flowers, go to the bank, have your photos developed, even get new tires in some monster markets. We’ve exported many ideas to the rest of the world, maybe some of which we can’t be too proud of. But supermarkets are symbolic of abundance and prosperity, and we can definitely be proud about that. 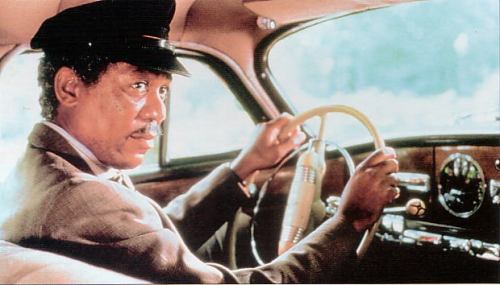 Hoke tries to talk Miss Daisy back into the car so he can drive her to the Piggly Wiggly. Uploaded by fujishobo.np.infoseek.co.jp

Can’t you see the pitch meeting in Hollywood for this movie? WRITER: “It’s about an old Jewish woman in Atlanta and how she comes to respect her black chauffeur.” MOVIE EXEC: “Does something blow up? Do they have to run from the fireball?”

Miss Daisy was a 72-year-old woman who’d had an accident, and her son felt it was no longer safe for her to drive. So he hires a chauffeur to take her around town. She resists the idea, even telling her driver, “This is not the way to the Piggly Wiggly!” 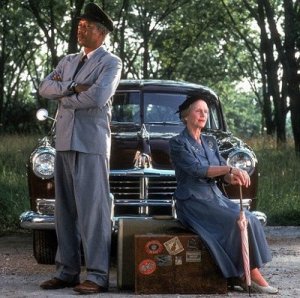 Although Driving Miss Daisy was a successful play before being adapted to the screen, I think the film’s success depends almost entirely on the performances of Jessica Tandy as Miss Daisy Werthen and Morgan Freeman as Hoke. Morgan Freeman was nominated for an Oscar (he lost to Daniel Day-Lewis’s wonderful performance in My Left Foot), and Jessica Tandy was named Best Actress, becoming the oldest winner (81) of that honor.

Speaking of awards, this movie has a couple of unusual distinctions. Alfred Uhry wrote the screenplay, based on his own Pulitzer award-winning play. It’s only the second Pulitzer winner that was adapted and became Best Picture, following Frank Capra’s You Can’t Take it With You (1937). Driving Miss Daisy is also the first film since 1932 to win Best Picture without its director (Bruce Beresford) even being nominated.