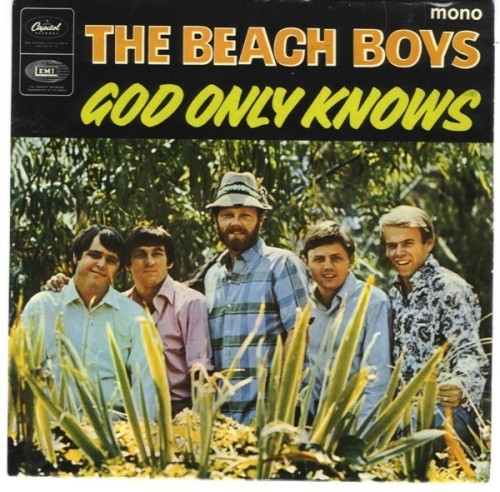 When released as a single, "God Only Knows" was on the flip side of "Wouldn't It Be Nice," which initially got more attention. Still, Mojo magazine named it the 13th best song of all time, and Rolling Stone had it as number 25. Uploaded by 24ur.com.

The Beach Boys (Great American Things, May 16, 2009) changed with the times during the sixties — or maybe, they made the times change. Known originally for surfing and car songs (“Surfer Girl” and “Little Deuce Coupe,” e.g.), the Boys – and particularly Brian Wilson — wanted to make songs with more complex structures, more unusual harmonies, different instruments. The song that led the way in this direction was “God Only Knows.”

Brian Wilson wrote the melody and Tony Asher composed the lyrics. And they knew instantly that they had a hit on their hands. Asher bucked conventional wisdom by starting a love song with a negative: “I may not always love you.” Most producers would have insisted on a change, but Wilson embraced the innovative approach. This was also the first pop song to have “God” in the title, and this would bother me personally…except that it seems clear that this wasn’t using God’s name in vain. The singer doesn’t know what he’d do without his love, and seems to appeal to God for solace.

When released, it was on the flip side of “Wouldn’t It Be Nice,” another great song.Back in 1990, Paul McCartney said about “God Only Knows”: “It’s a really, really great song — it’s a big favorite of mine. I was asked recently to give my top 10 favorite songs for a Japanese radio station … I didn’t think long and hard on it but I popped that on the top of my list.” And Bono said, “The string arrangement on ‘God Only Knows’ is fact and proof of angels.” The song was named the best song of the 1960s by Pitchfork Media, the 13th best song of all time by Mojo magazine, and made number 25 on Rolling Stone’s 500 greatest songs of all time.

Mojo magazine named Pet Sounds its number one album of all time. It's number two on Rolling Stone's list. Yet it had only three singles, none of which reached #1. Uploaded by ditrixaa.blogspot.com.

If you only need to know one thing about this, the 11th studio album released by the Beach Boys (Great American Things, May 16, 2009), it’s all in one statement made by George Martin, legendary producer of the Beatles. He said, “Without Pet Sounds, Sgt. Pepper wouldn’t have happened… Pepper was an attempt to equal Pet Sounds.” And yet, Brian Wilson was motivated to make this album because he was so impressed by The Beatles’ Rubber Soul.

Mojo magazine named it the number one album of all time. Rolling Stone was a little more reserved – it made it number two. (Sergeant Pepper was number one, so it looks like George Martin did his job.) You’d think an album so universally praised would be chock full of hits. But there were only three singles released on the album: “Wouldn’t It Be Nice” (reached number 8), “Sloop John B” (number 3), and “God Only Knows” (number 39).

So many influential musicians have praised Pet Sounds so lavishly, their words should conclude this tribute. Elton John: “It is a timeless and amazing recording of incredible genius and beauty.” Paul McCartney: “It was Pet Sounds that blew me out of the water. I love the album so much. I figure no one is educated musically ’til they’ve heard that album.” Eric Clapton: I consider Pet Sounds to be one of the greatest pop LPs to ever be released. It encompasses everything that’s ever knocked me out and rolled it all into one.”