In 1912, Santa Fe mandated that all buildings be constructed in the Spanish Pueblo Revival style, giving the city a distinctive look in harmony with the surrounding Sangre de Cristo mountains. Uploaded by coldwellbankersantafe.com.

Okay, here’s a trivia fact sure to win you a bar bet: Santa Fe, N.M. is the highest state capital above sea level. (Cheyenne is second, Denver third.) Maybe it’s the altitude that has made the city so different, and so fascinating. Certainly the surrounding terrain is beautiful, with the mountains providing a palette for the desert sun. The architecture is in the pueblo, adobe style — mandated by law. And the mix of people who call the area home is as varied as the rich tapestries for sale in the markets and galleries. 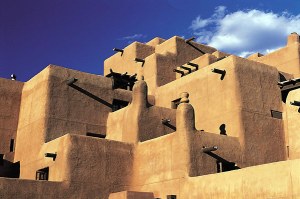 Historically, the city is at the intersection of the old Camino Real and the Santa Fe Trail. Geographically, it’s nestled in the Sangre de Cristo mountains. Culturally, it’s a national center for art, opera, and the traditions of both Hispanic and Native American life. And spiritually, it’s been a destination for wide variety of truth-seekers throughout its history.

Santa Fe is celebrating its 400th anniversary in 2010. And it’s certainly not a secret these days. Conde Nast Traveler Magazine Readers’ Choice Awards poll named Santa Fe as the #3 most popular travel destination in the U.S. In the TripAdvisor Travelers’ Choice Awards, Santa Fe was rated as the #2 U.S. destination in the Relaxation & Spa category, #9 for Great Food & Wine, and #10 for Culture and Sightseeing.

Posted on September 28, 2009 by Robin Chalkley | Leave a comment 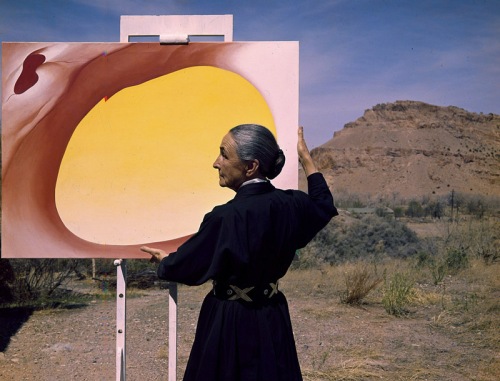 When Georgia O’Keeffe first pursued her art, she found herself stifled by the demands of imitative realism, the style taught in art schools. Though she won awards, she didn’t feel comfortable. Fortunately, she came under the influence of a teacher who helped her realize she could use art to express her feelings and ideas, and her imagination and creativity were unleashed.

In 1924, O’Keeffe created Petunia, No. 2, her first large-scale painting of a flower at close range, as if seen through a magnifying glass. These paintings sold for large sums, making her one of America’s most successful artists of the period.

Another theme for which O’Keeffe is known came as a result of her visit to New Mexico in 1929. Traveling through Taos, Santa Fe, and Albuquerque, she grew to love the rugged mountains and deserts of the Southwest. These landscapes, stark architectures, and animal bones became an integral part of her work. She spent time in New Mexico almost every year, and finally moved there permanently in 1949.

More than 500 examples of her works are in over 100 public collections in Asia, Europe, and North and Central America, and she received the Presidential Medal of Freedom from President Gerald Ford in 1977.