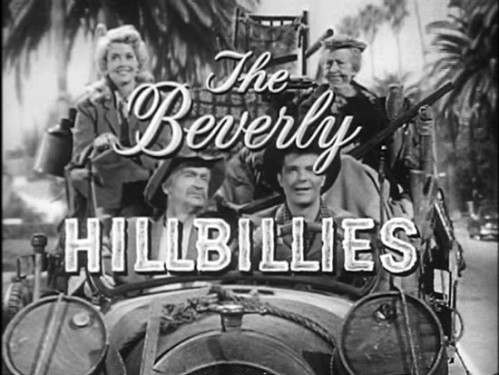 The Beverly Hillbillies theme didn't quite make my Top 10, but it's a great example of a theme that sets up a show's premise. Uploaded by wikimedia.org.

I’m not sure if theme songs are as important to TV shows today as they used to be. In the early days of TV, they were used to lyrically set up the premise for the entire series. A good example of this was the theme to The Flintstones (“Flintstones. Meet the Flintstones. They’re a modern Stone Age family…”) Then there was a trend toward instrumental themes, the majority of which seemed to be created by Mike Post.

Those that I think are worthy, but not quite in the top ten are: All in the Family, The Addams Family, The Beverly Hillbillies, The Flintstones, The Jetsons, The Simpsons, Hill Street Blues, The Jeffersons, Miami Vice, Rawhide, Peter Gunn, The Waltons, Welcome Back, Kotter, The Muppet Show, and Fraggle Rock.

Anyway, you may disagree with these selections – of course you will – but here are my top ten television theme songs:

10. The Brady Bunch “Here’s a story of a lovely lady who was bringing up three very lovely girls…”

9. The Garry Shandling Show The show broke the fourth wall, and the theme song was the first (only?) to announce itself as a theme song.

4. The Patty Duke Show Probably the least well known on this list, but great lyrics prove it belongs.

3. Cheers “You want to go where everybody knows your name.”

2. The Andy Griffith Show Whistling that takes us back to the good old days.

1. Twin Peaks From the opening notes of Angelo Badalamenti’s score, you know this isn’t going to be just another TV show.