Born in Germany and educated in Switzerland, Einstein recognized the Nazi threat and emigrated to the U.S. He became an American citizen in 1940. Uploaded by isgtw.org.

Einstein was not an American by birth; he grew up in Munich, then went to secondary school and university in Switzerland. But he, along with many other scientists, saw what lay in store for the Jews when Hitler rose to power. In fact, there was a $5,000 bounty placed on his head by the Nazi regime. He therefore emigrated to the United States in 1933, and became an American citizen in 1940.

By the time he arrived in the U.S., Einstein was already world famous for his theory of relativity, and he had received the Nobel Prize in Physics in 1921. Einstein took a position at the Institute for Advanced Study in Princeton, New Jersey (which is not affiliated with Princeton University). As World War II approached, Einstein wrote a famous letter to President Franklin Roosevelt, warning him that Germany might be attempting to develop a nuclear bomb. He told the President about the urgency of developing the weapon first, and his letter is credited with prodding Roosevelt to action. Einstein himself never worked on the Manhattan Project, however. 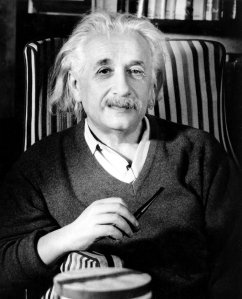 When the first president of Israel died, Prime Minister David Ben-Gurion asked Einstein to be the new state’s leader. Einstein refused, realizing that he was more comfortable with theories than people. He said, “I am deeply moved by the offer from our State of Israel, and at once saddened and ashamed that I cannot accept it. I have neither the natural ability nor the experience to deal with human beings.”

Einstein was politically active following World War II. Calling racism America’s “worst disease,” he joined the NAACP at Princeton. He also vocally opposed Sen. Joseph McCarthy, whose Congressional investigations attempted to find Communists in public life. Einstein wrote a letter that was published in many newspapers in which he condemned the hearings. “Every intellectual who is called before one of the committees ought to refuse to testify,” he wrote.

Time Magazine named Einstein “Person of the Century” in 1999…

Murrow's program See It Now took on the Red Scare and led to the humbling of Sen. Joseph McCarthy. Uploaded by bobedwardsradio.com.

Had Adolph Hitler not chosen to subjugate England during the blitz of 1939, Edward R. Murrow might be just another forgotten wartime journalist. But Hitler foolishly kept bombing during what became known as the Battle of Britain, and Murrow’s nightly reports from London’s rooftops riveted even isolationist Americans. When he concluded with “Good night, and good luck,” Murrow inadvertently coined one of the first catchphrases in broadcasting history.

Following his celebrated term as a war correspondent, Murrow came home to the post of Vice President of Public Affairs for CBS, but couldn’t shake the desire to get back behind a microphone. He anchored the nightly newscast on CBS Radio for several years, then began his own program, Hear It Now. But the advent of television already began to eclipse the influence of radio, and the show became See It Now when Murrow moved it to CBS Television.

Clearly the most memorable episode of See It Now was Murrow’s attack on the Red Scare, led by Sen. Joseph McCarthy. Depicted in the recent film Good Night, and Good Luck, the program used mostly McCarthy’s own words to show his contradictions and paranoia. It was the beginning of the end for the senator, and Murrow is rightly held in high regard for helping to bring that shameful chapter in American history to a close. 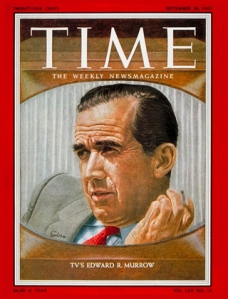 Murrow also pioneered what might be called celebrity journalism in his Person to Person series. He’d visit people in their homes (sound familiar, Barbara Walters?), encouraging them to let down their guard and speak freely. He interviewed a wide spectrum of people, including Frank Sinatra, Bogart and Bacall, Margaret Mead, and John Steinbeck.

Edward R. Murrow is still the standard by which television news is measured. But the man himself was aware of his medium’s limits. He once said, “If we were to do the Second Coming of Christ in color for a full hour, there would be a considerable number of stations which would decline to carry it on the grounds that a Western or a quiz show would be more profitable.”