Book/Film: The Grapes of Wrath

Posted on November 9, 2010 by Robin Chalkley | Leave a comment 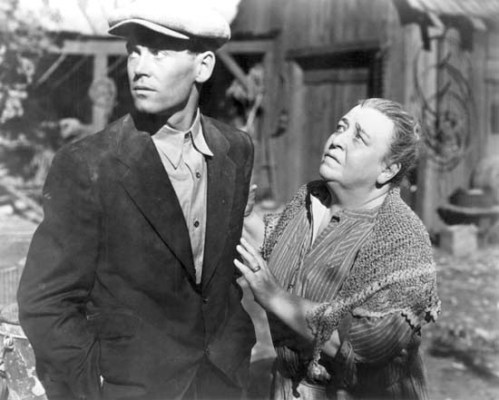 The novel was published in 1939, and earned John Steinbeck the Pulitzer Prize for Literature. The movie followed the next year, and earned 7 Academy Award nominations. Uploaded by john mariani.com.

The Grapes of Wrath is the moving story of the Joad family, Okies forced from their farms due to the crop failures brought on by the Dust Bowl. Tom and the family make the pilgrimage to what they’ve been led to believe is the promised land — California. But when they arrive, they find that there are too many migrants, and too few jobs.

Published in 1939, The Grapes of Wrath earned John Steinbeck (Great American Things,  October 24, 2009) the Pulitzer Prize for Literature in 1940. That’s the year the film version debuted, directed by John Ford and starring Henry Fonda as Tom Joad. As often happens in adaptations, the movie had a slightly happier ending than the book. Part of that can be attributed to the natural inclination of film producers to want audiences to leave happy; part is likely due to the fact that Ford and executive producer Darryl F. Zanuck were more politically conservative than Steinbeck.

The film was nominated for seven Academy Awards, and won two. The American Film Institute’s original “100 Years…100 Movies” named it the number 21 film of all time. As for the book, Modern Library honored it as the tenth-best novel of the 20th century.

Posted in FILM, THE ARTS