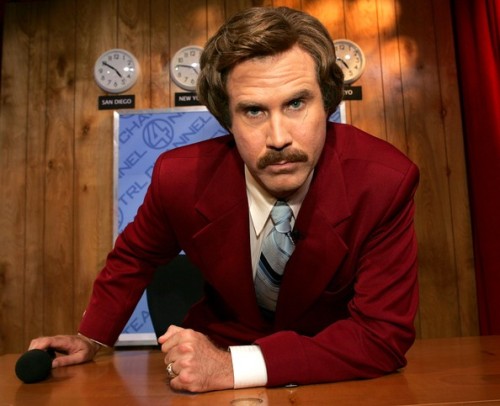 Will Ferrell in Anchorman: The Legend of Ron Burgundy, perhaps his funniest role. Or maybe that would be Ricky Bobby. Hard to say, the man is a great comic talent. Uploaded by zimbio.com.

I don’t think anyone will be comparing Will Ferrell’s acting ability with, say, Robert DeNiro anytime soon. I hope they never do, because the whole reason we love Ferrell is that he doesn’t take himself too seriously. Bill Murray is an example of a funny man who proved that he could move into more substantial roles. I hope Will Ferrell never tries. Just be funny, Will. Just be funny.

Ferrell had his break on Saturday Night Live (Great American Things, April 9, 2009), where he created some memorable impressions (George W. Bush, Harry Carey, James Lipton), some great characters (Cheerleader Craig Buchanan), and one of the show’s most memorable skits (“More cowbell”). He stayed on SNL for seven years before devoting his career to films.

Will Ferrell hasn’t won any major acting awards, and it’ll be an upset if he ever wins one. But he currently commands $20 million per picture, and that will  buy a lot of Oscars on eBay.