Americana: “Take Me Out to the Ball Game” 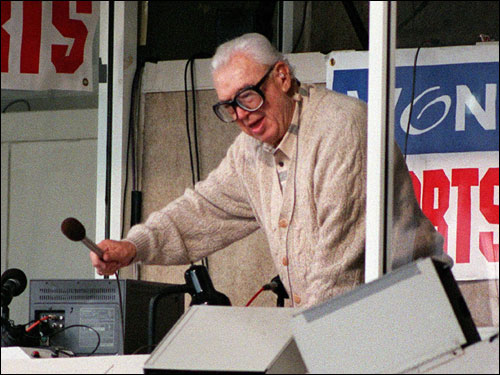 Harry Caray probably did more to associate Take Me Out to the Ball Game with the 7th-inning stretch than anyone. Uploaded by cache.boston.com.

Here you have the unofficial song of baseball, written in 1908. Want a really strange bit of trivia? Neither the lyricist (vaudeville performer Jack Norworth) nor the composer (Albert Von Tilzer) had ever been to a baseball game when they wrote the song. And neither would go for at least two more decades.

Well someone who wasn’t a moron, not that he was precisely a genius, either, was Harry Caray. The famous broadcaster for the Chicago Cubs, Caray probably did more to associate the singing of this song with the seventh-inning stretch than anyone. So, take it away, Harry!

Pretty much forgotten now is that Wrigley Field also hosted the Chicago Bears from 1921-1970. Uploaded by farm1.static.flickr.com.

For baseball fans, one of the game’s true shrines is Wrigley Field, a.k.a. “The Friendly Confines.” Located in Chicago, it’s the oldest ballpark in the National League, having been built just two years after Boston’s Fenway Park (Great American Things, June 1, 2009).

The stadium was built for the Federal League team, the Chicago Whales. I’m sure a logical reason exists for naming a team the “Whales” in a city that’s a thousand miles from the ocean, but it escapes me. The Cubs took over the park two years later.

The powers that be in Major League Baseball have finally recognized the appeal of distinctive stadiums, after building ghastly cookie-cutter buildings like Riverfront Stadium in Cincinnati and Veterans Stadium in Philadelphia. There are so many factors that make Wrigley unique — the ivy-covered brick outfield walls, the marquee over the main entrance, the hand-operated scoreboard, the rooftop seats across Waveland Avenue, and Harry Caray (and now special guests) leading the crowd in singing “Take Me Out to the Ballgame” during the seventh-inning stretch.

Wrigley is one of the first ballparks constructed of concrete and metal rather than wood, one of the secrets to its longevity. It’s pretty much forgotten now, but the Chicago Bears played their home games in Wrigley from 1921 to 1970. “Da Bears” won seven NFL championships during their tenure at Wrigley, a success that has thus far eluded the hometown Cubs. So we only have one choice: “Let’s root, root, root for the Cubbies…”