She sings! She dances! She needs a Brinks truck for her salary! Uploaded by moviewallpaper.net.

There’s no question that Meryl Streep belongs on a short list of the greatest film actors of all time. And yet, she’s someone that people seem to admire more than love. She gets respect, not adulation. But I suspect she may be just fine with that.

She’s been nominated for a record 15 Academy Awards. If she appears in a film, odds are good the Academy will recognize the excellence of her performance. She’s won two: for Kramer vs. Kramer and Sophie’s Choice. She’s also been nominated for more Golden Globe awards than anyone else, a remarkable 23 nominations. She’s won a record-tying six (the above two films plus The French Lieutenant’s Woman, Adaptation, Angels in America, and The Devil Wears Prada). 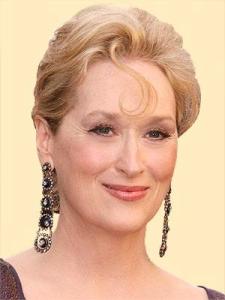 In 2008 she surprised me by taking the lead in the fluff musical Mamma Mia, but only because I didn’t know her background. Meryl had voice lessons at an early age, and considered being an opera singer. She became interested in acting while a student at Vassar, and enrolled in the Yale School of Drama after graduation. One of her classmates at Yale was Sigourney Weaver. Yeah, that was a pretty impressive class.

It will be a remarkable thing if Meryl ever gives another performance as emotionally powerful as Sophie Zawistowska in Sophie’s Choice. She employed a flawless Polish accent in that film, a talent which has become one of her trademarks. That role was ranked in 2006 by Premiere Magazine as number three on its list of the 100 Greatest Performances of All Time.

Here’s a delicious bit, with Meryl playing the evil boss so very well in The Devil Wears Prada: