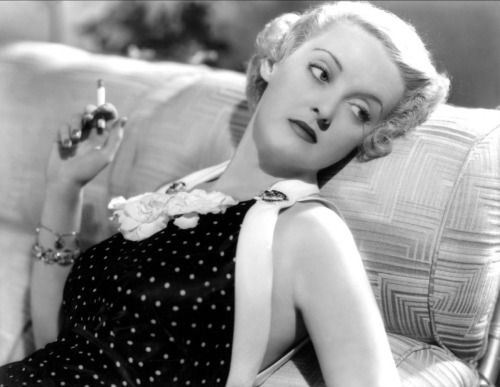 I had to find a picture in which her eyes didn't scare me. It wasn't easy. Woman had the scariest eyes EVER. Uploaded by image.toutlecine.com.

Bette Davis still scares me. I can go back and watch movies from her early career, when she was young and beautiful, and I think, “Yeah, but look how she turned out. Scary.” The song was right – it was her eyes. They just make me want to look the other way.

As I’ve seen with many actors during the early years of the studio system, Bette Davis was forced to be in some pretty lousy movies during the early part of her career. Her breakout performance came after she’d been in more than 20 films, with her role in Of Human Bondage. It demonstrated her courage in taking roles that were unsympathetic, something she was willing to do throughout her career.

One thing of which Davis was particularly proud was her part in the establishment of the Hollywood Canteen during World War II. She took an abandoned nightclub, fixed it up, made sure there were name stars there every night, and opened it to servicemen. She even made a movie based around it, with the unsurprising name Hollywood Canteen.

The AFI honored her as the first woman to receive its Life Achievement Award in 1977. And in its list of 100 Years…100 Stars, she was the second-highest-ranking woman, behind only Katharine Hepburn (Great American Things, December 26, 2009).