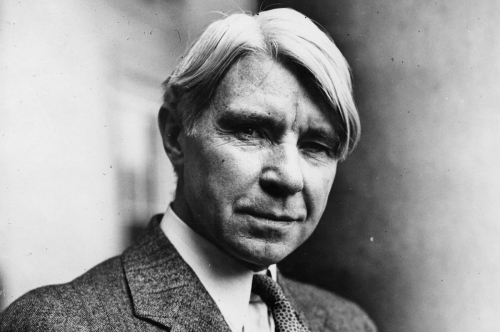 Perhaps because of his strong Midwestern, especially Chicago, roots, it's not surprising that Sandburg wrote several biographies of Abraham Lincoln - one of which won a Pulitzer Prize (to go with the two he won for poetry). Uploaded by riverrunfilm.com.

California has its artists and writers, as does New York. Lots of writers are associated with the South and New England. For some reason, those born in the Midwest – the staid, stolid, hard-working Midwest – often move to a coast to practice their art. That’s one reason Carl Sandburg is celebrated, because he made his reputation in Chicago, and only moved to North Carolina to retire.

Here’s how he famously described his adopted hometown:

Hog Butcher for the World,
Tool Maker, Stacker of Wheat,
Player with Railroads and the Nation’s Freight Handler;
Stormy, husky, brawling,
City of the Big Shoulders:

During his lifetime, Sandburg published 22 books of poetry in addition to a number of biographies and children’s books. It’s probably no surprise, considering his Illinois heritage, that Sandburg wrote several books about Abraham and Mary Todd Lincoln, one of which won a Pulitzer Prize. He won two other Pulitzers for his poetry. He said, “Here is the difference between Dante, Milton, and me. They wrote about hell and never saw the place. I wrote about Chicago after looking the town over for years and years.”