He wasn’t quite the best golfer of his era. You’d have to give that honor to Jack Nicklaus. But he was the most influential. His rapport with his fans, who became known as Arnie’s Army, translated into a wider influence that made him the unofficial ambassador of his sport.

His list of professional accomplishments is certainly more than impressive. He’s won the Masters four times, the U.S. Open once, and the British Open twice. He finished second in the PGA Championship three times, but never managed to complete his personal grand slam. Even so, he was named by the Associated Press as the Male Athlete of the Decade for the 1960s. 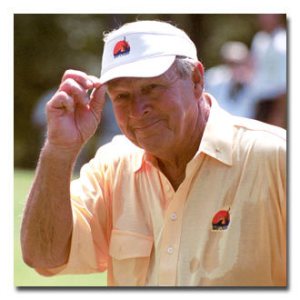 After his retirement from competition, Arnie became involved in a number of businesses, and is a noted golf course designer. More than 200 courses around the world bear his imprint.

Arnie will turn 80 this year. His golf swing is notoriously unorthodox, and best not imitated. But we could all follow the example of  his down-to-earth demeanor, compassion, and dedication to charity work. We could all enlist in this branch of Arnie’s Army.