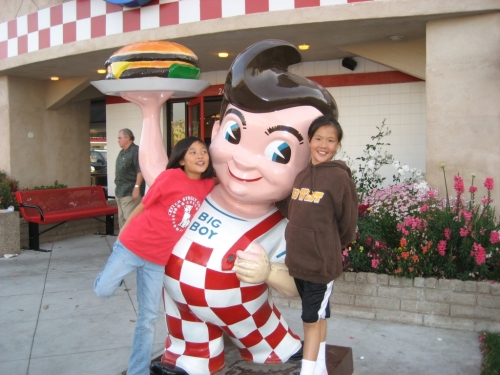 Several hundred Big Boy restaurants still operate, but the Shoney's I went to throughout my high school days will always remain a particularly sweet memory. Uploaded by ron-and-iris.geefamily.net.

No matter where you live in the U.S., you probably had a franchise of Big Boy near you. Where I grew up it was Shoney’s Big Boy, lots of places had Bob’s Big Boy, and there were a couple of dozen other franchises authorized to place the fat kid out front.

The original Big Boy restaurant came to Glendale, California in 1936. Started by a man named Bob Wian, the restaurant’s iconic image is said to be based on a local kid named Richard Woodruff. The restaurant was just known as Bob’s Pantry then, but as the owner was trying to name his new hamburger, Woodruff came in and Wian said, “Hey, big boy.” Well, that’s the story, and I suppose it makes as much sense as any other explanation.

McDonald’s would never admit to stealing the Bic Mac from Big Boy, but the truth is the two sandwiches are a lot alike. The Big Boy didn’t have onions, and that’s about the only difference. Other delicious items on the Big Boy menu included the Slim Jim, Brawny Lad, strawberry pie, and hot fudge cake.

I had lots of good times hanging out at the Shoney’s Big Boy in the Warwick area of Newport News, Virginia. Seems like we were there every weekend during my high school days. Like lots of other parts of my youth, Shoney’s is just a memory, but it’s one I hold with a special fondness…