TV Show: The Price Is Right 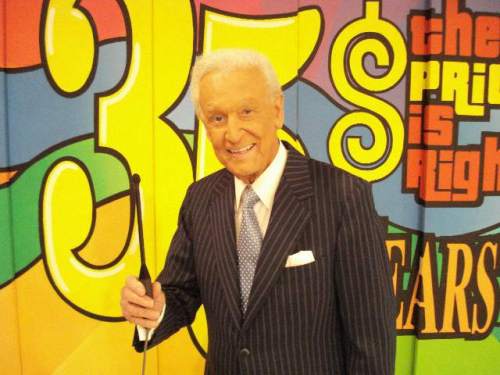 Bob Barker is the greatest host ever of The Price Is Right, but I have a soft spot for Bill Cullen. Uploaded by moneyteamusa.net.

“Robin Chalkley…Come on down! You’re the next contestant on The Price Is Right!” No, I’ve never heard those words, nor will ever hear them, but there’s a part of me that would love to win…A NEW CAR!

Actually, I have attended a taping of The Price Is Right, but not the current version. When I was a kid visiting New York with my parents to see the 1964 World’s Fair, we were walking on the streets of midtown Manhattan when we were offered tickets to the show. Obviously, they needed to fill the studio audience. That show, featuring Bill Cullen (one of the all-time greatest game show hosts) ran from 1956-1965.

The show was reincarnated in 1972 as “The New Price Is Right.” (“New” was dropped when the show no longer was.) And Bob Barker took over as host, and Janice Pennington became the show’s all-time best model. Barker continued until his retirement in 2007, when the show ended.

Wait, it didn’t end. They brought in Drew Carey as host, and he is to Bob Barker what Conan O’Brien is to Johnny Carson – a pale comparison. (Of course, Conan would be a pale comparison to anyone. Ba da boom.)

A couple of weeks ago, the show celebrated it 7,000th episode. Think of how many showcase showdowns have occurred, how many times Barker was hugged by happy winners, how many people went home empty-handed because they overbid by a few bucks.

If you’re ever in Argentina, don’t miss El Precio Justo. In India, it’s Yehi Hai Right Price. In Vietnam, watch Hãy Chọn Giá Đúng, Wherever you travel around the globe, you’re likely to be close to one of the 35 or so countries that have their own version of the show. Luigi Bartolomeo – Venire qui! You’re the next contestant on OK il Prezzo è Giusto!