Carnegie Hall was the home of the New York Philharmonic for 70 years until the opening of Lincoln Center. Uploaded by images.nymag.com.

Two blocks south of Central Park on Seventh Ave. you’ll find one of the world’s premier concert halls. Funded, as the name implies, by the great philanthropist Andrew Carnegie, the building has been a leading venue for outstanding artists in many musical genres since its completion in 1892. It’s known for its beauty and fabulous acoustics.

The main auditorium, which seats 2,804 on five levels, was home for the New York Philharmonic until it moved to Lincoln Center in 1962. Without its primary tenant, the building was scheduled for demolition to make way for a skyscraper. Fortunately, the city of New York was able to purchase the historic site, much to the relief of music lovers everywhere. 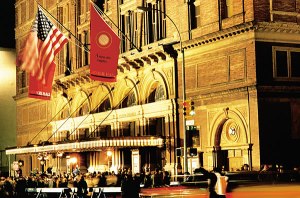 Over the years, Carnegie Hall has seen the debut of important musical works, including Symphony No. 9, opus 95, “From the New World” by Antonín Dvořák, Sinfonia Domestica by Richard Strauss, and An American in Paris by George Gershwin. Other composers whose works premiered at Carnegie Hall include Sergei Rachmaninoff, Béla Bartók, Duke Ellington, Igor Stravinsky, and Philip Glass.

Lest you think popular music has no place in such a sacred venue, consider that rock and roll has been represented by everyone from Bill Haley and the Comets to the Beatles to Pink Floyd to Stevie Ray Vaughn.

Naturally, you’ll want to see this important building when you visit New York City. So exactly how do you get to Carnegie Hall? Prac…