Milk chocolate M&M'S (nee plain) were created in 1941, but because of their slow-melting nature, were only sold to the military. The world became a better place when peanut M&M'S came along in 1954. Uploaded by just-for-jack.com.

I couldn’t decide whether to make this post about plain or peanut M&M’S. I love them both. I vacillated. Plain. Peanut. So, what the heck. They’re both great. 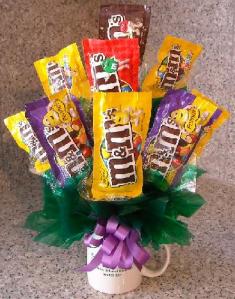 Named for the company’s founders (Mars and Murrie), M&M’S are made by Mars, and have been around since 1941. Back then, however, you couldn’t purchase them across the counter – because they resisted melting, they were sold only to the U.S. military. Peanut M&M’S made their debut a little later, in 1954, and were only available in tan at first. Speaking of color, there’s been a lot of mythology surrounding this candy’s colors, and they’ve changed over the years.

M&M’S can now be personalized with your own message. And they’re available in a bunch of different flavors, like peanut butter and pretzel. Yeah, yeah. Whatever. They can make them in caviar and truffles, but they won’t improve the originals. And if you’re beyond a certain age, you probably will never forget their former advertising slogan: “M&MS milk chocolate melts in your mouth, not in your hands!”