Kate Smith has always been identified with this great song, written in 1918 by Irving Berlin. She introduced it on her radio show in 1938, then sang it in the movie "This Is The Army" during World War II. Uploaded by bibliopolit.com.

Hard to believe, but “God Bless America” languished unsung and unknown for its first twenty years. The great Irving Berlin (Great American Things, May 11, 2010) composed the song in 1918 for a review he created, then decided it didn’t really fit. Then, as World War II threatened Europe (and Berlin’s fellow Jews), he resurrected the song for Kate Smith, who sang it during her radio show on the twentieth anniversary of the end of WWI. 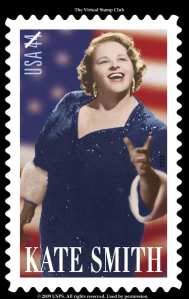 Many people are unaware of the opening stanza, which Kate Smith always included: “While the storm clouds gather far across the sea / Let us swear allegiance to a land that’s free / Let us all be grateful for a land so fair, / As we raise our voices in a solemn prayer.” Of course, Smith has been associated with the song ever since. She performed it in the WWII musical, This Is the Army, itself adapted from Berlin’s Broadway Musical of the same name.

“God Bless America” is easier to sing, and less “militaristic” than the Star Spangled Banner, leading some to urge its adoption as our national anthem. That’s not likely to happen, but the song can still bring a thrill to any Patriotic American. Here’s Kate Smith’s original version, followed by a great rendition by Martina McBride.

This entry was posted in Holiday, SONG and tagged God Bless America, Irving Berlin, Kate Smith, This Is The Army. Bookmark the permalink.