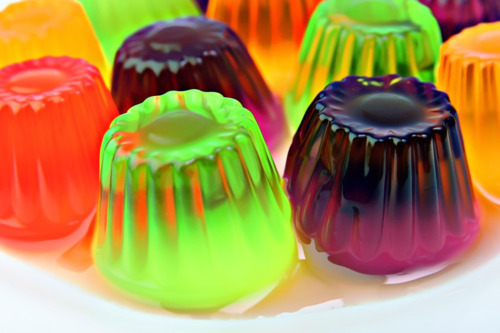 Jell-O debuted with four flavors back in 1897 - strawberry, raspberry, orange, and lemon. Today the product line includes more than 150 flavors of gelatin, pudding, cups, pops, and more. Uploaded by wehearit.com.

Is there anyone who doesn’t like at least some of Jell-O’s products? It’s something we grew to love as kids, made for us by parents because it was cheap, relatively easy to make, and if not healthy, then certainly not harmful. One of the first “cooking” I ever did was to make chocolate Jell-O pudding, stirring in the milk and continuing to stir until it thickened. Chef Robin, whose repertoire in the kitchen never advanced much.

Rather than go on about Jell-O, here are some interesting facts about this wiggly stuff:

Jell-O advertising has been part of the culture for 100 years. Even though it hasn’t been used in decades, I bet you can sing the five rising notes of the jingle “J-E-L-L-O.” And “There’s always room for Jell-O” is one of the enduring tag lines of modern advertising.