At the 1984 Olympics in Los Angeles, Mary Lou Retton earned five medals, the most of any individual in that Olympics. Uploaded by i.cdn.turner.com.

Everyone knows you can’t become a world champion gymnast if you live in Fairmont, West Virginia. But that didn’t stop Mary Lou Retton, who drew her inspiration from Romania’s Nadia Comaneci. She learned from the best trainer in town, but when she started to demonstrate Olympic-caliber talent, she moved to Houston. There she trained under the best – Béla and Márta Károlyi, the couple who trained Comaneci before they defected to America. 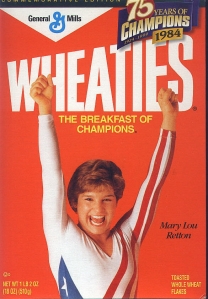 Retton made her name in 1983-84, winning the American Cup, two American Classics, and the Japanese Chunichi Cup. Then came the 1984 Olympics in Los Angeles. She trailed Romanian gymnast Ecaterina Szabó with two events remaining in the All-Around competition, but scored a perfect 10 in her floor exercise and vault to win the gold medal by .05. The first American ever to win the All-Around, she also earned two silver medals and two bronze in 1984. Her five medals were the most earned by any athlete at that Olympics.

Her accomplishments earned her the honor of being Sports Illustrated’s Sportswoman of the Year – and the first woman ever on a Wheaties box. And, appropriately, the 4’8″ giant in her field received induction in the International Gymnastics Hall of Fame in 1997.