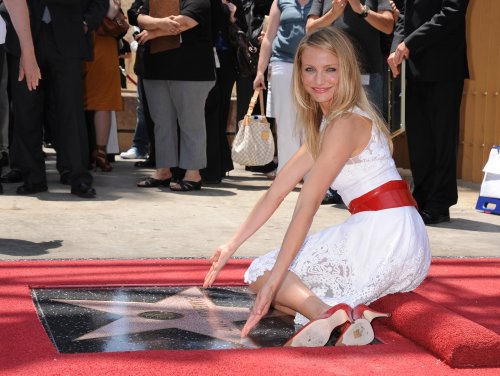 Cameron Diaz shows off her star on the Hollywood Walk of Fame. The Hollywood Chamber of Commerce ruled that to get a star, you have to show up for the ceremony. So far, everyone has - except Barbara Streisand. Uploaded by haveuheard.net.

It stretches for 15 blocks along Hollywood Boulevard, and three blocks of Vine Street. That’s 1.7 miles total, featuring more than 2,500 stars. The biggest names in the entertainment industry are there, of course, but also a lot of people you never heard of, unless they’re your cousins. Who could ever forget Gregory La Cava, Fred Niblo, or Marie Doro? You’re right, we all could, and have. But something made them seem as worthy of a star as Humphrey Bogart, Marilyn Monroe, Sidney Poitier. 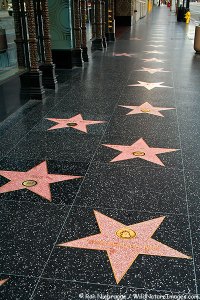 Although conceived in the early 1950s, the first 1,558 stars weren’t finally ready for public view until 1961. The Hollywood Chamber of Commerce administers the Walk, and it created a special committee to develop the criteria for inclusion and for selecting new honorees. Usually about 25 new stars are added each year. Stars are awarded in five categories: motion pictures, broadcast television, music, radio, and theater/live performance (added in 1984). Strangely, an individual can receive a separate star for each category, and only person has been recognized in all five – Gene Autry.

The Walk of Fame is said to be viewed by 10 million visitors annually.

This entry was posted in Americana and tagged Hollywood, Hollywood Boulevard, Hollywood Walk of Fame. Bookmark the permalink.