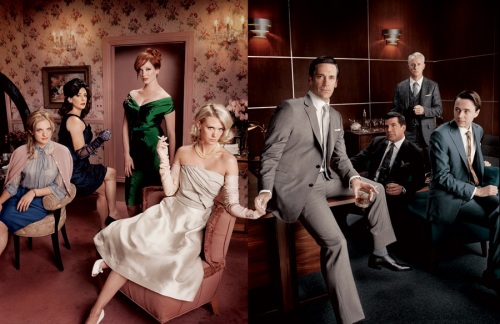 Mad Men depicts life in an advertising agency during the early 1960s. They drink, they're bigoted, they have affairs, and man, do they ever smoke. Uploaded by dvdsetshop.com.

What was it like to work in an advertising agency in the early 1960s? Chances are, it’s a lot like the environment portrayed at Sterling Cooper Draper Pryce on AMC’s Mad Men. The producers have been meticulous in reproducing the era’s office appearance, clothing, even its props. And something significant to the show’s time frame – smoking. The show’s creator, Matthew Weiner, said, “Doing this show without smoking would’ve been a joke. It would’ve been sanitary and it would’ve been phony.”

Weiner not only conceived of the premise and wrote Mad Men’s pilot script, he’s its head writer and executive producer. He hasn’t shied away from the controversial aspects of the turbulent sixties – dealing with sexism, feminism, homosexuality, and racism. But the show isn’t an excuse for revisiting that period; it’s not The Wonder Years in advertising.

Mad Men got off to a slow start in ratings, but has continually grown during its four seasons. Critical reception has been mostly laudatory from the beginning, however. The Television Critics Association named the first season as its show of the year. It won the Primetime Emmy for Outstanding Drama each of its first three seasons, and 12 other Emmys as well. It has also won the Golden Globe for Best Drama Series the same years, as well as the American Film Institute selection as one of the 10 best series of the year.