Singers: The Mamas & The Papas

Though they were only together for four years, 1965-68, The Mamas & The Papas had eleven Top 40 hits and a Grammy for Best Vocal Performance. Uploaded by woodstock.com.

Popular music was heading down dual tracks in the 1960s. Most of the attention went to the band track, led of course by the Beatles along with the Rolling Stones, Led Zeppelin, The Who, and others. The second track was the vocal music trend, and I’d put most of Motown (Great American Things, August 9, 2010) in that camp, the Beach Boys (Great American Things, May 16, 2009) – and The Mamas & The Papas. For vocal harmony and fresh arrangements, this group was fresh and unique. When you first heard “California Dreamin'”, you knew you were listening to something special. 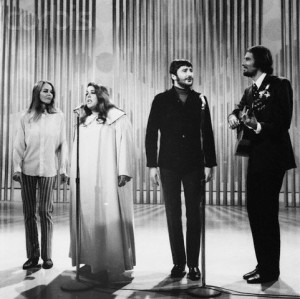 They weren’t the most prolific group in the world, partly because they weren’t together all that long. They recorded as a group from only 1965-68, and released just five albums. Eleven songs hit the top 40. These aren’t particularly impressive statistics. But the quality of the music and the impact they had on future groups is disproportionately large to their output. Their major hits, and their top chart position, included:

The four members of the group (John Phillips, Michelle Phillips, Cass Elliot, Denny Doherty) had complex interpersonal relationships that eventually made staying together problematic. While they were together, though, they earned four Grammy Nominations, and won for “Monday, Monday.”

2 responses to “Singers: The Mamas & The Papas”