The iPod began a revolution in portable, cool music players. But it's now beyond music; you can store photos, watch videos, even play games on today's iPods. Uploaded by fanpop.com.

Later this year, the iPod will celebrate its 10th birthday. Of all the products Apple has created that have changed our lives, none might be as revolutionary as this music player. It’s hard to imagine a world without a music player that will fit in your pocket, and yet until a decade ago you had to buy a CD and have the player with you. As it has done consistently, Apple changed everything. 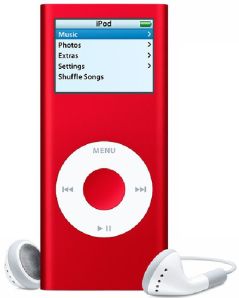 Of course, Apple has refined its breakthrough product, making it smaller and lighter while increasing its memory and usability. Now the iPod is a place to store photos, watch videos, even play games. And the technology has been incorporated into other Apple products, including the iPad and iPhone.

Another revolution the iPod helped create is the ability to build a music library a song at a time. Maybe you like one song on a CD, but don’t really care about the rest. Previously, you had to either buy the whole thing or do without. But now, you can buy just the songs you like, and customize your music library. I do, however, feel a little sorry for those who’ve grown up with this technology, taking it for granted. If you’ve lived, as I have, through the evolution of records to tapes to CDs, you have a much greater appreciation for the creative genius of Apple, and the wonder of the iPod.

This entry was posted in Music and tagged Apple, IPad, iPod. Bookmark the permalink.

One response to “Music: The iPod”