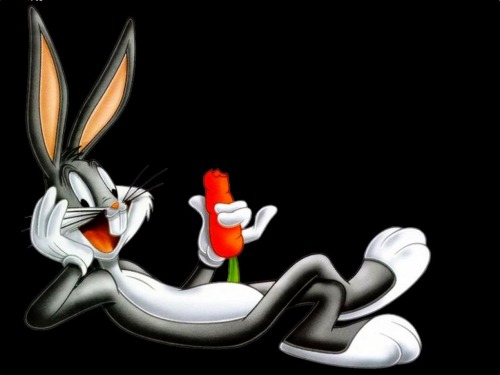 Bugs has been named the number one cartoon character of all time. Ever since his first appearance in 1940's A Wild Hare, Bugs has been our favorite wascally wabbit. Uploaded by top39.com.

It was all there in his very first appearance, A Wild Hare, directed by the legendary Tex Avery and released in 1940. The distinctive voice provided by Mel Blanc (Great American Things, July 31, 2009) … his eternal adversary, hunter Elmer Fudd who says for the first time, “Be vewwy vewwy quiet, I’m hunting wabbits” … and his now-famous catch phrase: “What’s up doc?” The only thing we didn’t know until his second film (“Elmer’s Pet Rabbit”) was his name: Bugs Bunny. 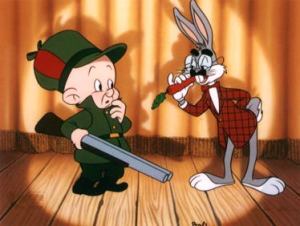 Audiences have always loved his smart-alecky attitude, and his fearlessness in the face of the dangerous hunter. Okay, we always knew there was no way Elmer would really get Bugs, so we felt safe. Bugs quickly became the star of the Merrie Melodies / Loony Tunes (Great American Things, March 10, 2010) cast of characters. He appeared in 163 cartoons over the years, not including his twelve appearances in features such as Who Framed Roger Rabbit and Space Jam.

Bugs should actually be introduced as “Academy Award Winner Bugs Bunny,” since his film Knighty Knight Bugs earned the statue for Best Animated Short Film. In 2002, Bugs took the honor of number one cartoon character of all time as selected by TV Guide. One of the magazine’s editors summed up the appeal of Bugs Bunny perfectly: “His stock…has never gone down…Bugs is the best example…of the smart-aleck American comic. He not only is a great cartoon character, he’s a great comedian. He was written well. He was drawn beautifully. He has thrilled and made many generations laugh. He is tops.”