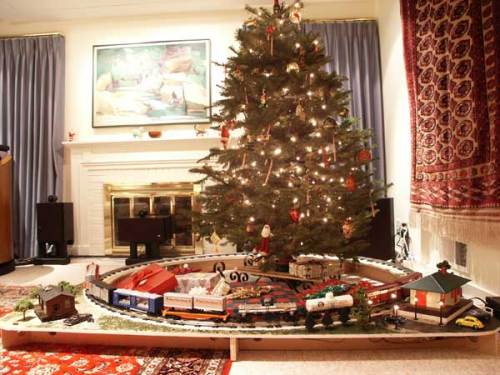 The first Lionel trains were created by a fan manufacturer to feature its motors. Turns out people couldn't have cared less about the motors or the fans, they wanted those trains. Uploaded by cokerfamily.com.

For many families of the 1940s and 1950s, a Christmas tree wasn’t complete without a Lionel train set encircling it. This wasn’t accidental, of course; as early as the post-WWI era, Lionel made the rounds of major department stores, showing them how much better their Christmas displays would look with a toy train included.

For many years, Lionel  disdained realism in its products. It made its trains larger and painted them in brighter colors than its competitors. Model train aficionados turned up their noses, but the mothers and fathers who bought 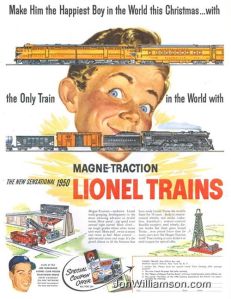 Lionel’s golden decade was 1946-56. Then something happened – kids became more fascinated with toy cars than trains. The company failed to diversify, lost business, and eventually had to file bankruptcy in 1967. General Mills purchased the brand name, and eventually a new Lionel company formed, but it has no direct link to the original.

Even though toy trains aren’t what they once were, seeing a train set humming along beside stations and through tunnels, is still a wonderful sight. Lionel trains were inducted into the National Toy Hall of Fame in 2006.