Between 1955 and 2005, more than TWO BILLION cans of Play-Doh were sold. The Toy Industry named it to the Century of Toys list honoring the most important toys of the 20th century. Uploaded by childrensscrapstore.co.uk.

This eternal kid’s substance, this staple of second grades and day care centers, wasn’t created as a toy. It began its existence as: a wallpaper cleaner. Now, I don’t know exactly how a group of Cincinnati schoolchildren decided to play with wallpaper compound, but they did. And they liked it. They liked it a lot. So the Kutol Company of Cincinnati thought, Hmmm. And Play-Doh was born. 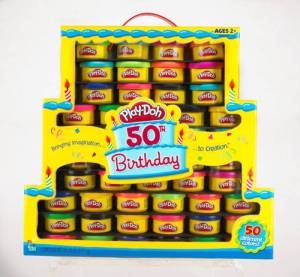 In the scenario above, Play-Doh existed for over a decade before what became its primary reason for being was discovered. The owner’s son took the compound to an educational convention, where Woodward & Lothrop decided to carry it. Then Macy’s of New York followed. And Marshall Field’s of Chicago. And success was just a matter of time.

While there are some additions to the compound to make it more kid-friendly, its main ingredients are water, salt, and wheat flour. It’s clearly a successful formula – more than two billion cans of the stuff were sold between 1955 and 2005. And the Toy Industry Association named Play-Doh  to its Century of Toys list. I’m telling you, that’s got to be the most impressive wallpaper cleaner of all time…

One response to “Kid Stuff: Play-Doh”