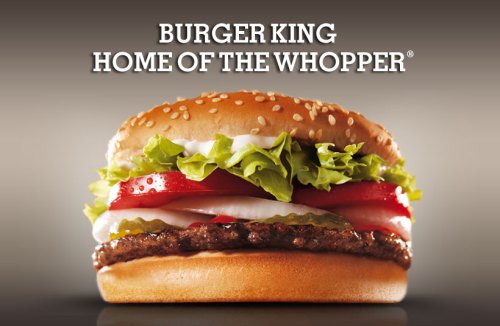 The Whopper vs. Big Mac is one of those Pepsi vs. Coke kind of things. But I like the flame broiled burger much better. Uploaded by burgerking.co.uk. 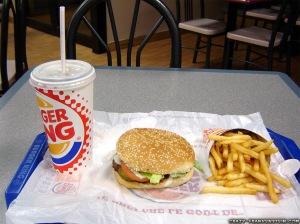 The Whopper has been so successful that Burger King markets itself as The Home of the Whopper. It’s not a complicated burger – 1/4 lb. flame-grilled beef patty, mayonnaise, lettuce, mustard, tomato, pickles, ketchup, sliced onion, sesame seed bun. I haven’t had one in a good while, but my experience is that the condiments make the sandwich slippery and it’s hard to hold it together. Maybe they’ve reformulated the mayo to make it more stable. I don’t know. Stay away from the doubles and triples, though. No one needs that much fat at one sitting.

Slippery or not, the Whopper sure tastes good. Burger King has made its mark in the fast-food industry by flame broiling its hamburgers, and it certainly makes a difference. McDonald’s introduced the Big Mac with two patties, and yet the burger itself just can’t equal the Whopper. Of course, this is one of those Coke vs. Pepsi things…but Burger King has an advantage in that they’ll make it your way. It’s been a long time since I’ve been able to eat hamburgers anytime I wanted, but if I could choose just one from a fast-food place today, it would be the Whopper. As long as that creepy King thing wasn’t around. Yikes.

This entry was posted in Food and tagged Burger King, McDonald's. Bookmark the permalink.