During his six decades as a conductor, John Williams has earned 45 Academy Award nominations and received 21 Grammys. Uploaded by fidgit.com.

Can a composer’s entire reputation be validated on the basis of just two notes? Beethoven needed four notes to embed his iconic Fifth Symphony into our consciousness. Well, John Williams did the master two better — the first two notes of the motif for the shark in Jaws are perhaps the most memorable in movie history.

Known best for his film scores, Williams broke in via the small screen. He composed music scores (though not the theme songs) for a number of series, including Lost in Space and Gilligan’s Island. Hollywood took notice, and soon he was writing music for film. He received his first Academy Award nomination in 1967 for Valley of the Dolls, and won the first time two years later for Fiddler on the Roof. 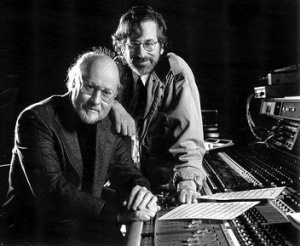 His music caught the attention of an upcoming young director named Steven Spielberg (Great American Things, July 22, 2009). Spielberg hired Williams to score his first movie, Sugarland Express, but it was his second movie — Jaws — that earned the maestro his second Oscar, and brought him from the background into the spotlight film composers seldom see.

Since then, Williams has scored such hits as Close Encounters of the Third Kind (creating its distinctive five-note theme), the original Star Wars trilogy, The Poseidon Adventure, Superman, three Indiana Jones movies, E.T. the Extra-Terrestrial, Born on the Fourth of July, Home Alone, Saving Private Ryan, Jurassic Park, Memoirs of a Geisha, Schindler’s List, and the first three Harry Potter films. In all, Williams has received an astonishing 45 Oscar nominations, and won five statues.

When not scoring movies, Williams found time to conduct the Boston Pops Orchestra from 1980 to 1993. He has earned 21 Grammys, and received the Kennedy Center Honors in 2004…

One response to “Music: John Williams”