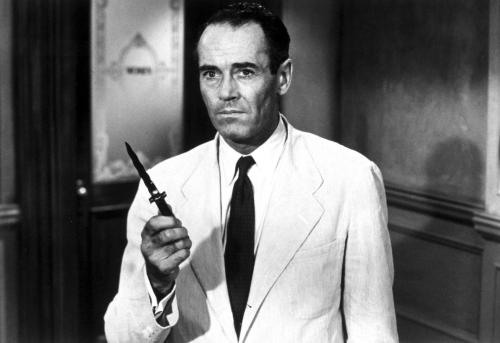 Perhaps Fonda's greatest role was in 12 Angry Men, which he also produced and which was nominated for Best Picture. Uploaded by battleshippretension.com.

The one word that comes to mind when I think of Henry Fonda is “unflappable.” I can’t remember a scene in any of his films, though I’m sure there must have been some, where he was anxious or distraught. Maybe that’s why he was often cast as an authority figure.

He was President in Young Mr. Lincoln and Fail-Safe… a marshal in My Darling Clementine… a college professor in The Male Animal… a nominee for Secretary of State in Advise and Consent… a police commissioner in Madigan… and a military officer in Fort Apache, Mister Roberts, The Longest Day, and Midway.

Fonda in The Grapes of Wrath, the role that made him a star. Uploaded by robertegger.org.

Fonda won acclaim for his roles in other films, including The Ox-Bow Incident and 12 Angry Men (probably his finest role). He received an Academy Award nomination for The Grapes of Wrath and finally won for his final major role in On Golden Pond. He also received the Academy’s Lifetime Achievement Award in 1980. In addition to film, he also acted in sixteen Broadway productions, and was recognized for Lifetime Achievement by the Tony Awards in 1979.

Of course, he became the paterfamilias of a prominent acting family that includes son Peter Fonda, daughter Jane Fonda, and granddaughter Bridget Fonda. Sadly, he wasn’t particularly close to his children. Yet both Peter and Jane were at his bedside when he died from heart disease in 1982.

He couldn’t describe his acting style, and his natural greatness frustrated Jane, who worked hard on what’s called Method acting. But it’s that effortless, smooth, natural grace that we remember when we think of Henry Fonda. President, Professor, Admiral, Marshal, Commissioner Fonda.

This entry was posted in ACTOR - DIRECTOR and tagged 12 Angry Men, Fail-Safe, On Golden Pond, The Grapes of Wrath, The Ox-Bow Incident, Yount Mister Lincoln. Bookmark the permalink.

One response to “Actor: Henry Fonda”