As Jimmy Stewart stood on the bridge in the machine-made snow, the temperature was 90 degrees. Uploaded to Flickr by Pikturz.

This movie is shown on TV at Christmas, but it’s not really a Christmas movie. It just happens that its climactic scenes take place during the season. It’s a film about – well, about the goodness of ordinary people. And second chances. And sacrifice.

It’s a Wonderful Life was originally planned as a vehicle for Cary Grant. But he was never pleased with the scripts developed, and decided to make another Christmas movie, The Bishop’s Wife, instead. Frank Capra then bought the rights, but still had a difficult time getting a script he liked. Though he may not have known it at the time, when he cast Jimmy Stewart (Great American Things, April 8, 2009) as George Bailey, he ensured that his film would be revered forever. 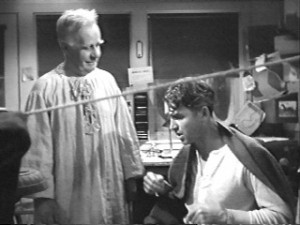 The box office wasn’t kind to the movie, however. It had the bad fortune to be released one week after The Best Years of Our Lives (Great American Things, May 25, 2009), which turned out to be the highest-grossing film of the decade, and which also took most of the Academy Awards for which It’s a Wonderful Life was nominated.

The American Film Institute named it number 11 in its 100 Years…100 Movies awards. And Jimmy Stewart’s performance was chosen as the eighth greatest performance of all time by Premiere magazine. Both Stewart and Capra said that It’s a Wonderful Life was their favorite film. “The film has a life of its own now,” Capra said in 1984, “and I can look at it like I had nothing to do with it. I’m like a parent whose kid grows up to be president. I’m proud… but it’s the kid who did the work. I didn’t even think of it as a Christmas story when I first ran across it. I just liked the idea.”

This entry was posted in FILM, Holiday and tagged Frank Capra, Jimmy Stewart, The Best Years of Our Lives. Bookmark the permalink.