Yep, regardless of all the other movies he made, he'll always be Rhett Butler to us. Uploaded by assets.nydailynews.com.

Admit it. When you hear “Clark Gable,” you think “Rhett Butler.” Gable was an excellent actor who appeared in many movies and won lots of acclaim, but he’ll always be Rhett Butler to us.

Most actors have a career role, but seldom has there been a man so prominent in a movie as successful as Gone With the Wind. Gable had already won the Oscar for Best Actor in It Happened One Night (1934), in which he and Claudette Colbert made a delightful team. And he received another Best Actor nomination for Mutiny on the Bounty (1935). So he already was one of Hollywood’s biggest stars when GWTW came along. But as great as those performances were, Clark Gable is Rhett Butler. 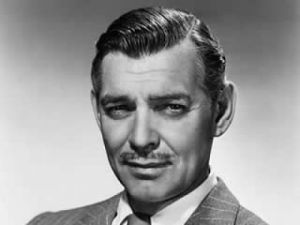 Gable’s career actually began in silent movies and lasted until 1961’s The Misfits, in which he co-starred with Marilyn Monroe in her final film. He worked opposite Joan Crawford eight times, Myrna Loy seven times, and Jean Harlow six times. But it’s that one movie opposite Vivien Leigh that has stayed with us.

He appeared in 81 movies in all, and you really can’t say he had a huge hit after 1939. Maybe he just became a bad judge of scripts. Maybe he just had bad luck. Or maybe it’s that even Hollywood producers always saw him as…you know.

Doris Day summed up Clark Gable this way: “He was as masculine as any man I’ve ever known, and as much a little boy as a grown man could be – it was this combination that had such a devastating effect on women.”

This entry was posted in ACTOR - DIRECTOR and tagged Gone with the Wind, It Happened One Night, Jean Harlow, Joan Crawford, Marilyn Monroe, Mutiny on the Bounty, Myrna Loy, The Misfits. Bookmark the permalink.