Every year there are new balloons introduced into the parade. Scooby-Doo made his debut in 2005. Photo by Jeff Christensen, AP.

Marching bands and gaudy floats are mandatory. And it just wouldn’t be Macy’s without Santa Claus riding into Herald Square. But really, the Macy’s Thanksgiving Parade is about balloons. Huge balloons.

The 2009 event marks the 85th anniversary of the first Macy’s parade, which went from 145th Street in Harlem down to Macy’s flagship store at 34th Street. These days it’s a bit shorter, starting instead at 77th Street at Central Park West. It was already a hugely popular annual event, but it became even more of an institution following the heartwarming film Miracle on 34th Street, which featured the parade.

Personally, I’m not a big fan of the entertainers riding on floats and lip-synching to recorded music. I do enjoy when performers from Broadway musicals do a number at the reviewing stand for the TV audience. Some of the shows featured in the last decade include such huge hits as Mamma Mia!, Hairspray, Wicked, Jersey Boys, and Spamalot. 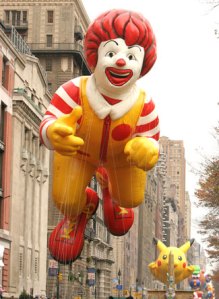 If you ever get to New York for the parade, one of the most interesting sights is the inflating of the massive balloons. It takes place the day before Thanksgiving around the Museum of Natural History between Central Park West and Columbus Avenue. You’ll look up and think, “You know, Ronald McDonald could stand to lose a few pounds.”

Here’s a cool look behind the scenes at this wonderful event:

This entry was posted in Americana, Holiday and tagged Miracle on 34th Street, Museum of Natural History. Bookmark the permalink.