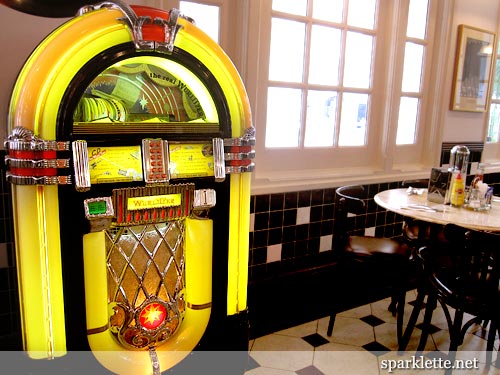 Used to be three songs for .50, seven for a dollar. Uploaded by sparklette.net.

I’d like to take this opportunity to explain how jukeboxes work. I’d like to, but I don’t have the foggiest idea. All I know is that you put in your fifty cents, and to hear the first of your three songs you hit A and 7 for “Eli’s Coming” by Three Dog Night.

Jukeboxes are the logical, if not technological heir to nickelodeons, the first play for pay devices. The machines played 78 rpm records until the Seeburg Corporation introduced the 45 rpm jukebox in 1950. 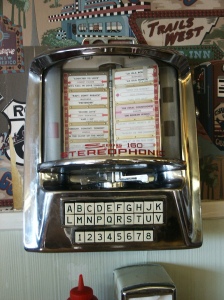 Of course, the fifties were the golden age of jukeboxes, when kids would gather at the malt shop to hear Bill Haley, Ricky Nelson, and Pat Boone perform “white” versions of great R&B songs. Whether they actually went to malt shops I can’t say, but it’s permanently etched into our cultural pantheon by movies like American Graffiti, and TV shows such as Happy Days.

My favorite type was the tableside jukebox, or wallbox. At first they were little more than remote controls that signaled the main jukebox what to play. But later they had their own speakers, so the tinny sound was right there at your booth.

By the way, the term “jukebox” apparently comes from a “juke joint”, and juke comes from a Gullah word meaning disorderly or rowdy. Of course, this information comes from Wikipedia, so I’m sure it’s accurate. I’d say 75, maybe 80 percent accurate.