Posted on October 6, 2009 by Robin Chalkley | Leave a comment 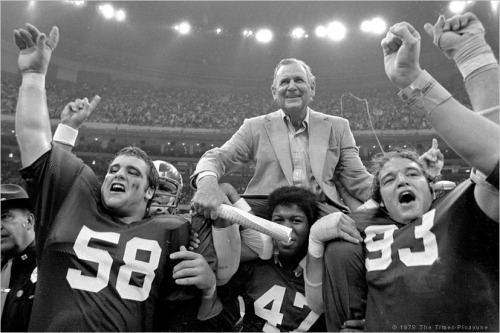 A national championship will get you a ride on the shoulders, but you may lose your hat. Photo by Jerry Lodriguss, The Times Picayune.

Paul “Bear” Bryant was born in Arkansas, and coached at Maryland, Kentucky, and Texas A&M. But just look at the man. Has there ever been a face that says “Alabama” more than this one?

At retirement, Bryant had the most wins of any coach in college football history. During his 25 years as head coach of the Crimson Tide, he won six national championships and 13 SEC conference titles. He was national coach of the year three times, and the trophy is now the “Paul ‘Bear’ Bryant Award”. 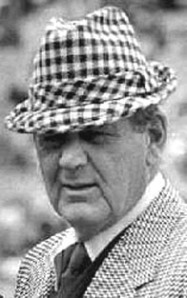 With the famous houndstooth hat. Uploaded by nndb.com.