Posted on October 1, 2009 by Robin Chalkley | Leave a comment

First, there was the sit-in. Then the hippies came along, and we had the love-in. This usage reached its highest (or lowest, depending on your perspective) point when two journeymen comedians captured the spirit of the age. And Laugh-In was born.

If you look at episodes of the show now, you come to an inescapable conclusion: It’s not funny. And it wasn’t all that funny at the time, either. But it was visually unlike anything that had been on TV before. It featured an extremely talented cast, including future stars Goldie Hawn and Lily Tomlin. And it pushed the envelope of what was allowed at that time, particularly in innuendo and in political humor. 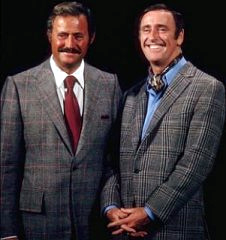 Foreshadowing Saturday Night Live’s (Great American Thing No. 10) success a few years later, Laugh-In featured a weekly “news” segment that lampooned the political and social stories of the day. But to make sure people didn’t think the show was too highbrow, that would be followed by girls dancing in bikinis with jokes and sayings written on their bodies. Also like SNL, Laugh-In contributed a number of catchphrases to the national vocabulary, including “Verrry interesting…but dumb.” “And that’s the truth. Pbbbt.” “You bet your sweet bippy!” “Look that up in your Funk and Wagnalls.” “Here come da judge.” And, of course, “Sock it to me.”

Laugh-In was on from 1968 to 1973, and claimed the number-one spot in the ratings for its first two seasons. The show was nominated for ten Emmy Awards during its run and won four, including Outstanding Musical or Variety Series in 1968.