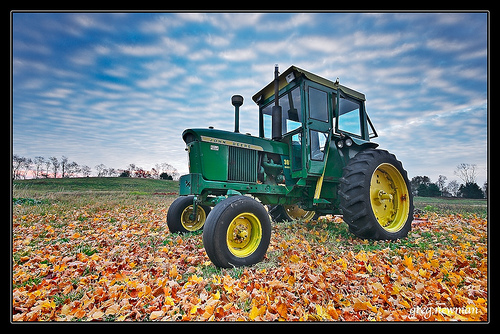 The name John Deere is synonymous with farming in the great American farm belt, stretching from the mid-South through the Midwest and into the plains states. So it comes as a bit of a surprise to learn that John his own self comes from…Vermont. Yes, Southern readers – John Deere was a Yankee.

John was a blacksmith, but times in Vermont were tough. He chose to head to the wonderfully named town of Grand Detour, Illinois to provide a better life for his family. There he built the first steel plow, and it was so well received that he decided to make his living building farm equipment. That was a good plan, John. Good plan.

Now Deere & Company employs some 56,000 people and has annual worldwide sales of more than two billion dollars. It’s ranked 102nd in the Fortune 500 largest companies. In addition to the familiar tractors and harvesters, the company also makes forestry equipment, off-road vehicles, and just about everything that can be used on a farm.

Everyone’s familiar with the John Deere green color, and the slogan “Nothing Runs Like a Deere” is one advertising’s great successes. When you drive that JD lawn tractor, you’re part of a manufacturing legacy that’s helped make America’s farming industry the envy of, and provider to, the world.

Joe Diffie did a song called “John Deere Green.” It’s awful, but it does a nice job of setting up lots of green farm stuff.

This entry was posted in Americana and tagged Farming, Machinery. Bookmark the permalink.