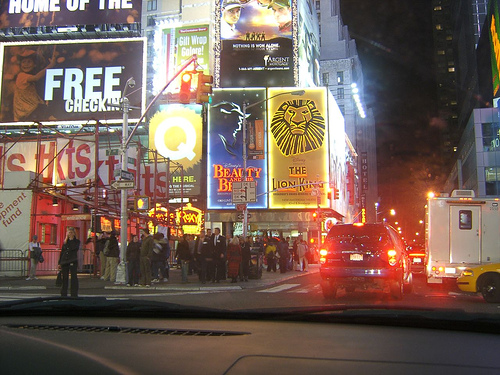 The TKTS booth, a source for discount show tickets. Uploaded to Flickr by billygiu.

Give my regards to Broadway. The Great White Way. The Theater District. The Street of a Million Lights. Okay, I made that last one up. But anyone who’s been to New York and not been to a Broadway show hasn’t had the full Big Apple experience.

According to Robert Rusie’s Talkin’ Broadway, the Theater District stretches from W. 41st St. to W. 53rd St., and only four of the roughly 40 Broadway theaters are actually on Broadway itself.

Lower Broadway in 1925, uploaded by talkinbroadway.com.

Broadway (the street) has always been the main artery of New York. It went from an Indian trail to a Dutch settlers’ country road, and for a century was the only road that extended the length of the island. Look at a map of NYC today, and you can see that Broadway doesn’t follow the city streets’ grid pattern.

Broadway audiences have become much more casual in recent years, a trend I find somewhat disheartening. If there’s any occasion where dressing up would still be appropriate, it would be to attend a major show at a theater on Broadway. I’m sure the theater owners are glad to have fannies in seats, but those fannies in suits and dresses would be so much better than jeans.

Broadway plays aren’t cheap, but there are several options for getting discount tickets. Most of the options can be found here. For once, there were so many options for today’s video…I particularly enjoyed this one:

Okay, I had to see this one again, too:

This entry was posted in Travel and tagged Broadway, New York City, THEATER. Bookmark the permalink.