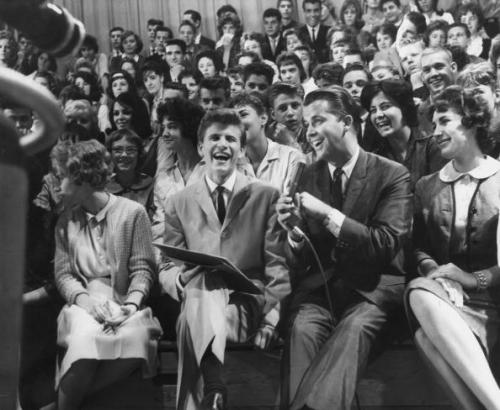 Kids dancing to records. What a simple formula for a television show. And what an amazing run Dick Clark and American Bandstand had with it.

Dick took over what was then a local Philadelphia show in 1957, and got ABC to put it on the network’s afternoon schedule. It was still produced in Philly until 1964, when it moved to L.A. where more of the musicians lived. Every afternoon, kids from all over the country watched the regulars – Kenny Rossi and Arlene Sullivan, Bunny Gibson and Eddie Kelly, and the rest. They copied their hair styles and learned their dances. They watched every afternoon for years until Bandstand made a move to Saturdays only. 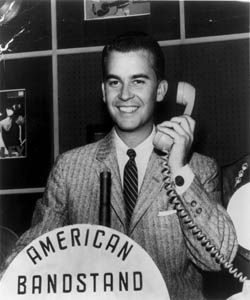 One of the great things about American Bandstand was that Dick Clark insisted black artists had to be a part of the show. In the late 50s that stand was controversial , but Clark recognized that to showcase American popular music without racial diversity would be a sham.

Some fun Bandstand facts. The guest who appeared the most times was Freddie “Boom Boom” Cannon (110). The first song on the national show was “Whole Lotta Shaking Goin’ On” by Jerry Lee Lewis. And I remember hearing that the song that got the all-time lowest total in the Rate-a-Record segment was “Walking My Cat Named Dog.” If it’s true, it’s richly deserved.

So come on, it’s our turn to be featured in the Spotlight Dance. American Bandstand: It’s got a good beat, and you can dance to it.

This entry was posted in TV SHOW. Bookmark the permalink.