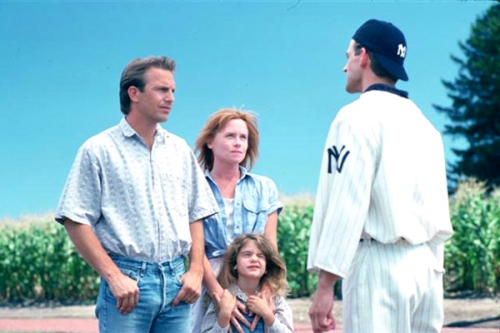 One of the most memorable lines in all of movie history, it’s what everyone knows about this movie even if they know nothing else. But there’s so much more. Ultimately, in a Hollywood that tells hundreds of mother/daughter stories, Field of Dreams is one of its few father/son dramas. And what makes it so fascinating is that it doesn’t dwell on that theme, merely alluding to it from time to time. Then it brings out the emotions at the end, when Ray Kinsella finds out what “If you build it, he will come” means. 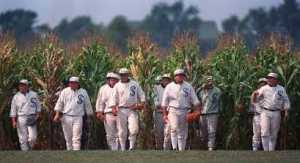 This movie involves what in fiction is called “magical realism.” Forces are at work beyond what we’re typically able to understand with our physical senses. Only a select few can see these forces perform their magic, those who allow themselves to believe. One of the movie’s taglines was, “If you believe the impossible, the incredible can come true.”

A couple of interesting bits of trivia: The movie was originally titled “Shoeless Joe Jackson,” same as the book it was adapted from. However, test audiences didn’t like the name, and it was changed to the much more marketable Field of Dreams…Archibald “Moonlight” Graham was a real player, and the facts of his life as stated in the movie were true. He only played one game, and became a doctor in Chisholm, Minnesota.

One other thing. Field of Dreams has some of the best, most appropriate music of any film I’ve ever seen. Very simple, and perfect.

This entry was posted in FILM. Bookmark the permalink.