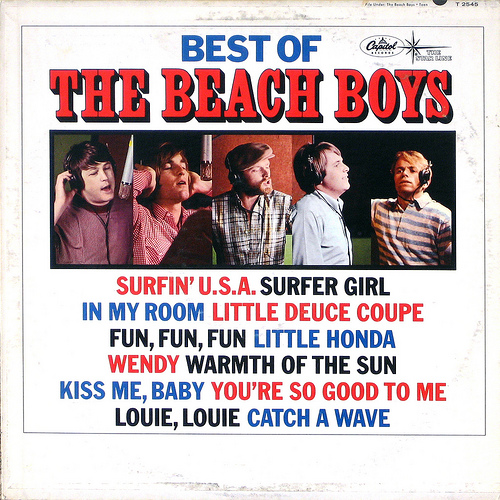 From 1964 to roughly 1967 or so, America experienced what was called “The British Invasion.” Following the success of the Beatles and the Rolling Stones, any four guys from Britain with guitars and long hair could have their music played on American radio. One band, which had already begun making its presence known as early as 1962, stood up to defend the honor of American pop music.

That group was The Beach Boys.

Their music, based on surfing and girls, had an all-American sensibility that no imported group could match. They had their first Top 20 hit, Surfin’ Safari, in 1962. The next year they entered the Top 10 for the first time with Surfin’ USA, which peaked at number 3. Their first number one single? I Get Around. To put that in perspective, in April the Beatles had the top 5 songs on the Billboard chart, and 14 songs in the Top 100.

The Beach Boys were serious about taking on the Beatles, as evidenced by the production of Good Vibrations. It took more than ten months to create, and at the time was considered their masterpiece.

I remember hearing it when I went to see The Beach Boys at The Dome in Virginia Beach in April, 1969. Looking back, I’m startled to find that the Dome only held 1000 people, since it was the primary music venue at the time for all of Tidewater, Virginia. I remember the girl I went with, the couple we double-dated with, and the single innocent kiss in the car on the way home.

One response to “Singers: The Beach Boys”